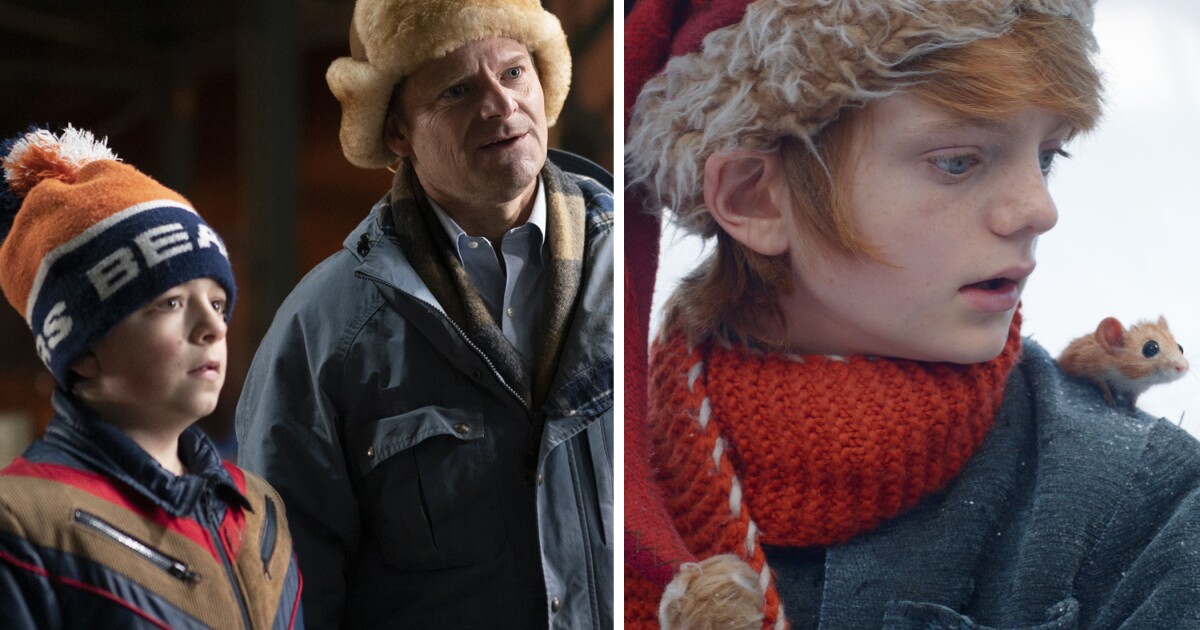 What makes a great Christmas movie? Something devotional, something heartwarming, something “Die Hard”-y with lots of violence and death? Two new entries in the holiday derby shoot their shots at the title (no extreme violence, though) and one turns out to be a contender. Is it the new Santa Claus myth … or the tale of ‘80s kids trying to score a video game system?

The fascinatingly muddled “A Boy Called Christmas” has many of the traditional ingredients: “Wonder of the season” score, storybook sets, elder stateswoman narrator (Maggie Smith), nice family, B to B+ visual effects. Its messages are as mixed as Aunt Frida’s eggnog, which the adults wince while drinking before talking nonsense.

There’s a boy named Nikolas (Henry Lawfull) in long-ago, what, Finland? And his handsome, kindly woodsman dad (Michiel Huisman). Mom is dead, naturally. Folks are depressed in the impoverished kingdom. In a bit of sly humor the film could use more of, the king (Jim Broadbent) tells his subjects he knows something is missing. The scruffy peasants say, “A healthcare system?” “A living wage?” “A fair system of governance?”

Turns out it’s “hope,” per the king, and able-bodied villagers go looking for it. Kristen Wiig shows up as a wicked aunt given to bouts of horrific child abuse, and the boy and his mouse (voiced by Stephen Merchant, I know, what a cast) go on the usual hero’s journey through the forest to seek the thing that will save his home. He finds the town of the elves, where Toby Jones and Sally Hawkins prove there are more big names in the cast, and that only really believing in something will allow you to see it.

Oh, this is actually a Santa origin story as you may have guessed by now; there will be reindeer and a red hat and lots of presents. Sounds cool, but some pretty messed-up things happen that will have viewers making the scrunched-up “What?” face, especially when one character dies rather than jumping to safety.

The film’s messages are a grab bag of “What in the?” … One of its attempted aphorisms — “The only thing simple and clear is the truth” — is objectively false (complicated truths require nuanced, complex thinking). It’s squarely aimed at kids, but there’s commentary on fear-mongering, isolationist politicians warning against mixing with outsiders at the risk of losing “our home, our culture.” Yet the solution to the town’s malaise is toys, and the comeuppance of the movie’s kidnappers and child abusers is they get chocolates and their kids get presents. That doesn’t seem right.

One supposes this all could be read as “Christmas is the opiate of the masses.” After all, the grubby townsfolk don’t get “a living wage” or “fair governance,” but colorful knickknacks … and they all presumably live happily ever after. It is beautifully assembled, however (kudos to Gary Williamson’s production design team).

“8-Bit Christmas” is a nostalgic trip down the late-’80s, suburban Illinois streets. The “8-Bit” of the title is the then-state-of-the-art video game console, the Nintendo Home Entertainment System, the ultimate prize for which the story’s fifth-grade crew vie. The film is loaded with authentic-feeling details (marking time by the fixed point of the Bears’ Super Bowl championship and Dad scoffing at his son’s complaint about the cold: “It’s not even below zero!”) and draws laughs out of an infamous baseball card and the Dewey Decimal System. It even earns its heart-tugging ending. In short, it’s a surprise contender for Best Christmas Movie of the last several years.

The setup finds Jake Doyle (Neil Patrick Harris, sharp as always) amusing his daughter Annie (Sophia Reid-Gantzert, with excellent timing) while they await the rest of the family in the house where Jake grew up. Annie’s bummed that Dad won’t give her a phone for Christmas; Jake sits her down with the still-functional Nintendo from his youth and tells the epic tale of how he got it. From there, it’s mostly Young Jake (Winslow Fegley) and friends’ many schemes to attain the holy grail of “Metroid” and “Donkey Kong.”

This is a very well-made film. Director Michael Dowse slips in little tricks such as introducing one of the mean kids by sliding him up to a high window as if he’s on a dolly track. Tip of the cap to music supervisor Madonna Wade-Reed: The ‘80s songs underscoring moments hit bull’s-eye after bull’s-eye, from just the right Loverboy intro to Animotion’s “Obsession” as a repeated theme. Kevin Jakubowski‘s script, based on his novel, supports those details with dialogue such as the annoying rich kid barking at guests, “Don’t touch the wall — it’s French!” and a veracity-challenged boy protesting he knows something is true because “a sixth-grader told me!” The stunts amuse: Kids get tossed like rag dolls by an unfairly large classmate.

Many supporting players have standout moments: As Jake’s sister, Bellaluna Resnick gets mileage out of torturing her brother; Mom (June Diane Raphael) wrings a laugh out of the tiniest judgy reaction to endearing Dad‘s (Steve Zahn) failed metaphor. Rich Delia’s casting doesn’t miss even in the smallest cameos.

But how does this add up to a great Christmas movie, when it’s essentially a nostalgic heist flick featuring kids with a materialistic goal? It works because the characters, relationships and desires feel so immediate that we become involved. The quest feels important, when the stakes are really no higher than a TV stand. Then when it’s either fulfilled or not, we’re open to a message about the meaning of the season, the deep love of family. It’s exactly the kind of moral that might be shrugged off if the ride weren’t so involved. And the ending is genuinely moving.

There you have it — one film that trades in traditional Christmas magic and one as earthbound as bicycles with cards in the spokes. Pick your spice.

‘’Twas the Fight Before Christmas’ Review: A Not-So-Silent Night – The New York Times