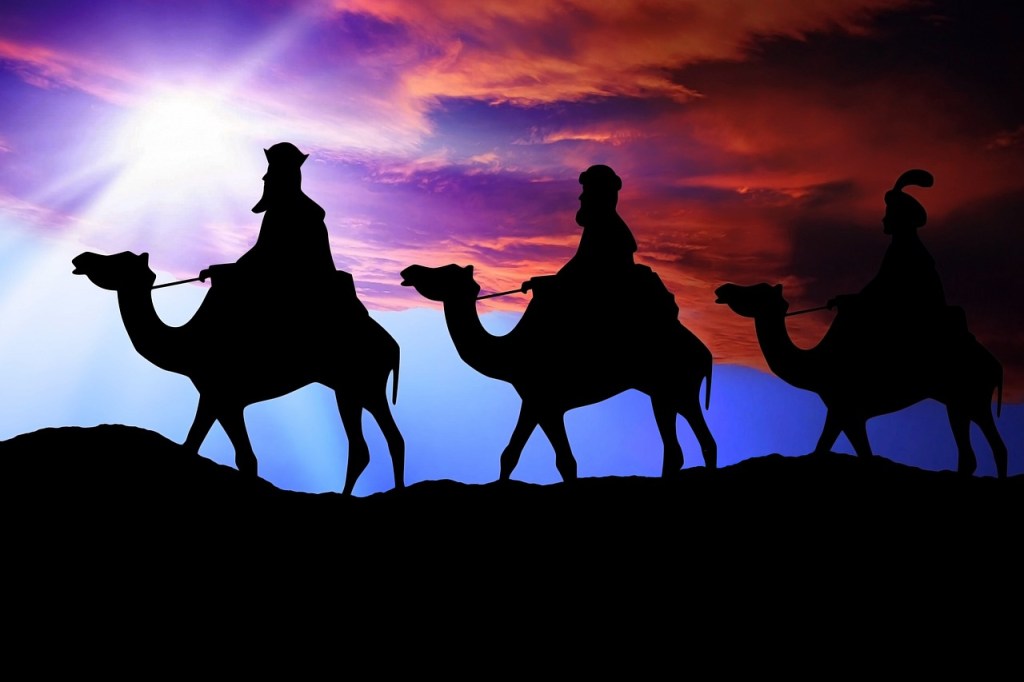 My column last week got lost in the shuffle as I changed e-mail services.

Many celebrate the night the Magi visited the newly born Jesus of Bethlehem on January 5th or 6th, depending on a group’s particular beliefs. The three Wise Men brought gifts of gold, frankincense, and myrrh. At today’s values, gold is $1,781.50 per ounce, frankincense resin is about $2.63 an ounce, and myrrh resin sells for $2.32 an ounce.

In the latter years of my teaching at CMU, my wife and I would host a 12th Night celebration inviting friends and colleagues to our house. We catered good food, good drink, good cheer. Talk. Stories and games made the evening fly on the wings of the wind. We hope this year is better for you.

On the eve of 12th Night we watched “Amahl and the Night Visitors” the first opera commissioned for television (1955). The boy, Amahl, is physically challenged (think Tiny Tim at 12 years old). He and his poor mother are visited by three kings and their entourage on their way to Bethlehem. Neighbors bring food, drink and merriment. When all are asleep, the mother reaches for a handful of gold, but is caught. Her son tries to protect her and promises to accompany the Magi. His legs grow strong and he leaves with them.

About 26 percent of those among us are glad the holidays are over. Peace on Earth and good will to all are anathema to their behavior. Unable to take responsibility for their own shortcomings they gladly place the blame on others less fortunate than themselves. This then allows them to hate those others. Typically the reason for being “other” is a single trait, over which the victims have little recourse: Skin tone, nationality, language, creed, education, just about anything “different”.

According to the Wall Street Journal (January 4th, page A4) there is social media talk of violence inspired by the January 6th mob attack on the Capitol. A recent WSJ poll shows that 81% of Republicans still have a favorable impression of former President Trump and 57% believe the 2020 election was “stolen.” There is no convincing evidence of voter fraud (there were fewer than 475 fraudulent ballots, most of which were never counted).

Three retired generals have written that there are a number of members of the Armed Forces that participated in the January 6th riot of the Capitol indicating that a similar riot in the future might succeed. In addition, social media is full of disinformation about violence. John Cohen, chief counterterrorism officer at the Federal Department of Homeland Security indicated “We are probably in one of the most volatile, complex and dynamic threat environments that I have experienced in my career.” Those familiar with the situation are concerned that “threat actors will try to exploit the upcoming anniversary” and possibly to commit violence.

On January 5, 2022, U.S. Attorney General Merrick Garland spoke to the Nation the day before the first anniversary of the mob attack on the Capitol. He said, “The Justice Department remains committed to holding all January 6th perpetrators, at any level, accountable under law — whether they were present that day or were otherwise criminally responsible for the assault on our democracy. We will follow the facts wherever they lead. We will defend our democratic institutions from attack. We will protect those who serve the public from violence and threats of violence. We will protect the cornerstone of our democracy: the right of every eligible citizen to cast a vote that counts.”

What the Justice Department is doing is prosecuting those who stormed the Capitol, and also going after the political actors and operatives — including former President DonnyT — who planned, financed and led the failed attempt to reverse the 2020 election results and who urged his followers to break the law.

Ed Fisher writes a weekly column for the Morning Sun.