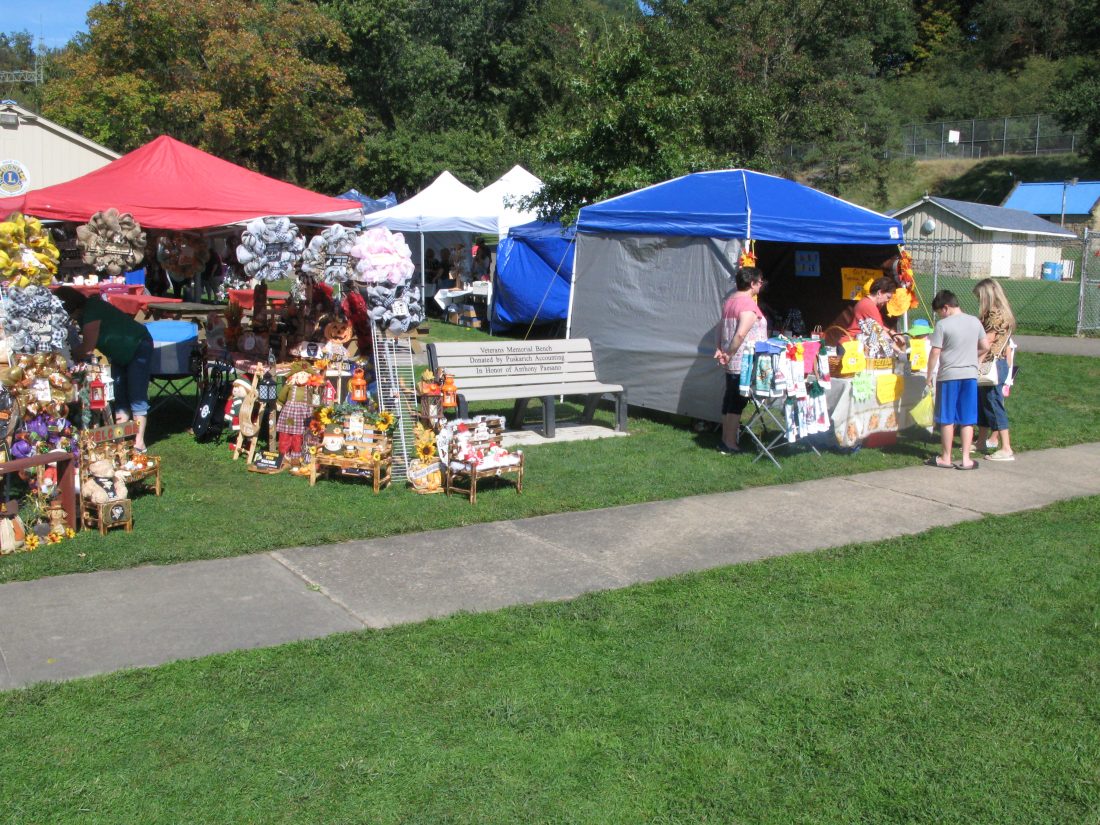 EARLY HOLIDAY SHOPPING — Many area residents started shopping for Christmas decorations and gifts a little early as they browsed through the many vendors participating in Follansbee Christmas in the Park Saturday and Sunday.
— Warren Scott

FOLLANSBEE — While recent temperatures have been unseasonably warm, visitors to Follansbee Christmas in the Park were reminded the holiday season is not so far away.

Patrons of the annual festival heard Christmas music from various eras as they made their way among the many food, craft and other vendors found at Follansbee Park.

For a few hours each afternoon, Santa Claus could be found visiting with children in the park’s gazebo.

And attendees were invited inside the Follansbee Community House to view several nutcrackers on loan from Steubenville’s Nutcracker Village in cooperation with the Nelson family, who are behind the hundreds displayed near Historic Fort Steuben each Christmas; and Steubenville Mayor Jerry Barilla.

Standing at the center between two sets of nutcrackers was a Christmas tree decorated with ornaments made by pupils from Brooke Primary North and Brooke Intermediate North.

Children from the two schools also produced the decorations hung from the fence along the paved path through the park’s grounds, where many vendors were found. They included colorful paper ornaments that were laminated to protect them from rain.

And rain did fall on the park Saturday, but many vendors found turnout between the two days to be very good.

Candy Cooper of Candy’s Gourmet Fudge said she brought a larger quantity of her assorted varieties of fudge than in 2019 and still sold out by Sunday afternoon.

With all of her stock sold, Cooper was looking forward to browse in the other vendors’ booths.

“I love this event. I really do,” said Cooper, a Mingo Junction native and New Somerset, Pa. resident, who added that when she participates, “I get in the mood for Christmas right away.”

Diana Perine was among several members of Follansbee Church of the Nazarene selling baked goods and other items within one of the park’s shelters.

She and Associate Pastor Jim Barnhart said the event helps them to spread the word about their church, which recently underwent interior renovations.

Another regular group at the festival are the retired teachers in the Alpha Delta Kappa sorority, who bring a large number of books for all ages that are free to anyone who stops by their tent.

Sandy Baldauf, a member of the group, said many are surprised to find there is no cost for the books, which members purchase at flea markets and other outlets and receive as donations as part of an ongoing effort to promote reading to all.

Since it began in 2002, the festival has raised money for local charities and children with special needs through drawings for gift baskets, a cash prize and a Steelers ticket package supplied by an anonymous donor.

Kathy Santoro, who launched the event with co-chair Bill Secrist and the help of many volunteers, said the best part of the event is the feeling of Christmas it helps to spark.

“It’s nice to get the spirit of it. It’s just perfect,” she said.

Santoro said Christmas in the Park has been held in all kinds of weather through the years but this year may have been the first in which a number of attendees were wearing shorts.

Another fan of Christmas in the Park is Wanda Wagoner of Follansbee, who said “I love it. It’s a fun time and a good time to bring your family together, see all of the children and enjoy the delicious food.”

Today’s breaking news and more in your inbox

The top Christmas songs of All Time

The top Christmas songs of All Time