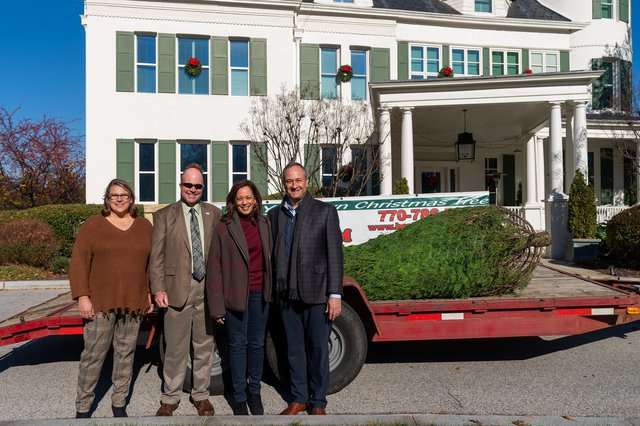 COVINGTON, Ga. — This past Christmas was a sweet one for Berry’s Tree Farm.

After their Murray Cypress Christmas tree in August was deemed Reserve Grand Champion in the 2021 National Christmas Tree Contest, Newton County tree farmer Chuck Berry earned the honor to see his award-winning tree erected in the home of Vice President Kamala Harris in Washington, D.C., for the holidays.

Berry said he and his wife, Lori, made the 10-hour drive to the nation’s capital Nov. 24 to personally deliver the Christmas tree.

“It was a treat,” he said. “As silly as it sounds, it was pretty emotional … Not too many people are able to do something like that.”

As the Berrys arrived to the vice president’s home, Berry said Harris and Second Gentleman Douglas Emhoff welcomed them outside “like anybody else would when we’ve delivered trees.” They met with the Berrys for about 30 minutes, Berry recalled.

“Politics aside, they were very receptive and very appreciative of the tree,” he said. “They were really engaged and interested. We really enjoyed our time with them … They made us feel very welcome.

“Any time you have the opportunity to meet any vice president, it’s quite the honor and accomplishment,” Berry added.

The Berrys’ Christmas tree was set up in the Turret Room in the residence at the Naval Observatory and decorated the next week.

In a Jan. 4 Newton County Board of Commissioners meeting, Berry was recognized for the achievement.

“[It is ] quite an honor for not only the family, but for the county, even for the state and for Christmas tree growers across the South, because, you know, everything’s based on the Fraser fir out of North Carolina,” Berry told commissioners. “You know, that’s what most people think of when they think of a real Christmas tree. And that is the Cadillac. We’re not fortunate enough to grow Fraser fir Christmas trees here. We rely on Cypress trees, pine trees and cedar trees, and most of those Fraser fir growers in North Carolina think of our Cypress tree as a landscape tree. And they don’t think you can grow a landscape tree into a Christmas tree, let alone be awarded Reserve Grand Champion and get to pull your truck and trailer into the front yard of the vice president’s house in Washington D.C. and show her what Newton County could do.”

Berry’s accomplishment is one that had been in the making for several decades.

Beginning as a dairy and row crop organization, the Berry Family Farm of more than 200 acres was started in January 1894 after Charles Woodson Berry purchased the property in the Almon community.

In 1969, the farm’s dairy operation ceased, and after selling its last herd of cows, the family welcomed a new form of farming a few years later.

In 1977, the Berrys planted its first crop of Christmas trees and began to sell them in 1983. The operation grew quickly — in 1999, the Berrys reportedly sold more than 3,700 trees.

Now under the family farm’s fifth (Berry) and sixth generations (son, Chase) of leadership, Berry said business has gone really well in recent years and getting to show off their product in the vice president’s home has yielded a great impact.

“Only positive effects on our business,” Berry said. “The last two years have been great for sales already, and from a publicity standpoint, this kind of stuff only helps.”